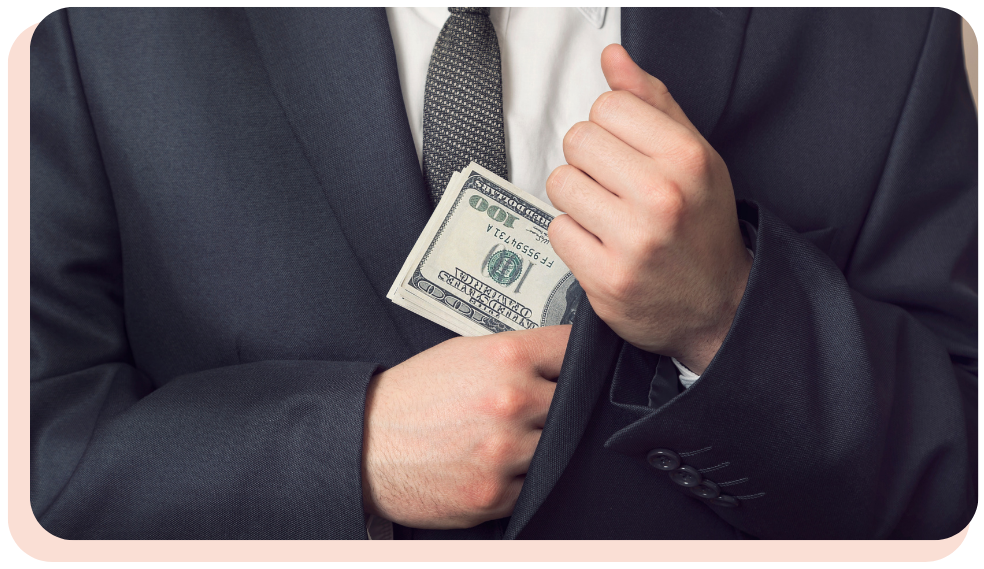 Quick Summary: The difference between bribery and extortion is that bribery is when someone accepts money or something of value in exchange for performing an act to benefit the person who gave it. Extortion, on the other hand, is when a person threatens harm to another unless they receive something from them.

Bribery and extortion are two crimes that may seem similar at first glance, but there is a major difference between the two. This article will discuss the differences between these two crimes under California law so that you can better understand how each crime applies to different situations.

The Definition of Bribery

Bribery1 involves giving someone money or something else of value in order to influence them to do something illegal or unethical. California law defines bribery as:

Corrupt intent is defined as wrongfully gaining a financial or another kind of advantage for yourself or someone else. If you offer money to a police officer to deter a speeding ticket, you commit bribery and can be prosecuted.

Additionally, it doesn’t matter if the transaction actually went through. Merely thinking about bribing someone and acting on that thought is still considered bribery under California Law.

All bribery offenses except for commercial bribery are considered felonies. If convicted of felony bribery, you face imprisonment for up to 4 years and formal probation.

The Definition of Extortion

Under Penal Code 518, extortion2 is when someone threatens you with some kind of harm if they don’t get what they want from you. Sometimes referred to as blackmail, extortion is a person using force or threats to compel another person to do something.

(a) Extortion is the obtaining of property or other consideration from another, with his or her consent, or the obtaining of an official act of a public officer, induced by a wrongful use of force or fear, or under color of official right.

This could include compelling:

Extortion is a felony offense that is punishable by custody for up to 4 years in state prison and the possibility of a max fine of $10,000. You may also be granted formal probation in lieu of prison time.

In addition to the prison time and fines, any violent felony is considered a strike under California’s Three Strikes Law. This law increases the punishments for multiple-time offenders. So, if this is your second or third violent felony offense, you could be charged with enhanced penalties.

The Difference Between Bribery and Extortion

These definitions seem very similar but there is one major difference. The difference between bribery and extortion is bribery does not include force or threats.

With bribery, both parties can be found guilty because they are both voluntarily partaking in the crime. In contrast, with extortion, one party is forcing the other party to act against their will.

As far as penalties for bribery and extortion offenses, there are a couple of differences. They both have state prison sentences but only extortion comes with a fine.

Also, bribery is not a strike law under California’s Three Strikes Law. This means that you will not receive enhanced penalties if this isn’t your first conviction.

Below are some examples of bribery and extortion offenses.

There are various laws that are related to California bribery and extortion offenses. Depending on the circumstances of the case, you may be charged with the following convictions along with your bribery or extortion charges. Read below to see if you might be prosecuted under additional statutes as well.

Eavesdropping is defined under California Law as unlawfully listening to or recording confidential communication without the consent of all parties involved. This crime is a wobbler offense punishable by imprisonment in county jail for up to a year or state prison for up to 3 years.  In both cases, you can also be charged a fine of up to $2,500.

While eavesdropping is a separate offense, it can be charged along with bribery or extortion. For example, let’s say you listen in one someone’s private conversation without them knowing. Then, you use the information that you heard in that conversation to blackmail them into doing something for you. This can be charged under PC 518 and PC 632.

California Penal Code 211 defines robbery as unlawfully taking personal property from someone else by using force or fear. This is similar to extortion but there is a major difference. Extortion involves the victim consenting to a taking of money or property. Whether this is through fear or not, they still consented, making it extortion.

However, if they never consented and you took the property anyway, it is considered a robbery.

PC 532 Theft by False Pretenses, also known as California’s Fraud Statute, criminalizes defrauding someone of money or property through false promises or representations. This is a wobbler offense that is punishable by up to 3 years in jail or state prison.

This is similar to bribery because both parties are consenting to the unlawful transfer of goods or services.

If you have a bribery conviction on your criminal record, it is possible for the charge to be expunged. This will remove it from public records so that potential employers and landlords can’t see it in the future.

However, if you’re looking to get an extortion charge expunged from your record, you are not eligible. Once convicted of extortion, even with successful completion of probation and parole time in full without any other offenses, this crime cannot be taken off your record.

It can, however, be reduced to a felony. Although still on your record, a misdemeanor doesn’t carry the same legal weight as a felony.

Expunging a bribery conviction or reducing a felony extortion charge can completely change your life. This will make it easier to get a job and rent a home. Contact our criminal law attorneys today to get your criminal record expunged.